Lots of people like to read manga, a comic work originated from Japan. Recently, a big news for the manga fans is that the final chapter of Attack on Titan Manga series was released on April 9, 2021.

Attack on Titan Manga series is the work of Hajime Isayama, a Japanese manga artist. The manga series was first issued in Kodansha’s monthly publication Bessatsu Shōnen Magazine on Sept. 9, 2009. The individual volume of the manga series was published on March 17, 2010. The adaptation of anime series includes four season so far. The first three seasons were produced by Wit Studio, and the fourth season was produced by MAPPA. The first season was released in April, 2013. The second season and third season were released on April 2017 and July, 2018, respectively. The first half of the fourth season was released in December, 2020, and the second half is expected to be released in winter 2022 season. With the adaptation of anime series, its sales rocketed. It has sold at least 100 million individual volumes over the world.

Isayama searched for his inspiration from his hometown, Hita, Ōita, which was surrounded by the mountains. In his childhood, he saw the cruelty of interaction between insects and their predators and was curious about the views outside the mountains. Later while Isayama he worked in an internet café, he met a drunk customer whom Isayama found it hard to communicate with. The idea of the fear to meet a person who you can’t communicate and insects’ interaction inspired him to create the scary, frightening, human-eating titans. The mountains surround his hometown became the prototype of the walls protecting human in the series. After finishing his draft, Isayama first offered Attack on Titan to Weekly Shōnen Jump, a manga companies whose famous works included One Piece, Naruto, City Hunter, Rurouni Kenshin, Dragon Ball, and many others. After he was declined by Weekly Shōnen Jump, he decided not to change his plots and style and offered the work to Kodansha. It turned out to be a great success with the rocketing sales.

The manga series won the first place of Kono Manga ga Sugoi! (“This Manga Is Amazing!”) in 2011. (Kono Manga ga Sugoi! is a yearly ranking based on opinions of people in manga or publishing industry.) It rated a score of 8.65 on MyAnimeList. It also won Kodansha Manga Award, the Attilio Micheluzzi Award, and Harvey Award. Its anime series was a great success in 2013. It won the Television Award Animation Kobe, an event held in Kobe, in 2013. It score 8.9 on IMDB, and has at least 200,000 sales in the U.S.

The manga series also reached other achievement. As the popularity increased, many companies like Aqua Clara, 7-11, JINS PC, and Schick developed co-branded products of Attack on Titans.  Isayama also designed advertisement and package of the plum wine, a famous product in Isayama’s hometown, Hita, Ōita. Additionally, the local government in Hita also collaborated with Isayama to create a Titan theme tour in the city. There were statues standing before the Oyama Dam and Hita station, and the tourist app was also designed with Titan theme.

The famous manga series ended on April 9, 2021. Attack on Titan is a famous work in Japanese manga industry for its plots, description of its characters, themes, drawing, and its animation. The work’s success also help the tourist industry in Hita. Next time if you visit hita, you can take a picture with the character and find your own inspiration.

There are some political, fighting, and bleeding contents in the series. Thus, you MUST watch it ONLY IF YOU ARE 16+. 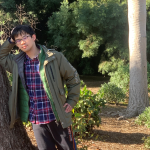 My name is Andy Chen. I’m 19-year-old. My family and I move to Arcadia, California, two years ago. I like math and science. In my leisure, I like to play board games, watch anime, and play badminton. My favorite board game is Rummikub, and I also like to play board games like The Legend of Three Kingdoms, The Message, and Seven Wonders. Everything here is fresh to me, and I’m still learning new things every day as a life-long learner. My favorite food is minced pork rice.

Previous Nuclear Fusion: A Possible Way to Provide Power in Future
Next About the hiking club in Arroyo Pacific Academy