US Border Situation. What may be hidden?

Is the border truly in crisis?

A tense situation is developing along the United States Southern border as thousands of people pour into the US in record-breaking numbers, but why is this happening?

Usually, around this time the US faces a spike in immigrants coming up from South America and Mexico, but this time it is dramatically high as compared to previous years.

Part of this is obviously due to the Coronavirus which has hit Mexico significantly and has overrun most of the population causing many people to seek to escape. However, it can also be seen that the current president, Joe Biden’s new stance on immigration and his acts to turn over previous policies that were harmful to immigrants, specifically children, has caused more to turn to the United States as a viable place to go to.

Unfortunately, unprepared border security was not able to handle the mass influx of people, and as such the chaotic situation at the border has led to many people calling it a crisis.

The flatfootedness of the administration and border team is due in part to the previous president, Donald Trump’s anti-immigration laws which dramatically reduced the number of immigrants allowed in by turning them back into Mexico and separating their families as a “deterrent”.

While this is not an ideal situation the question is, is this truly a crisis?

Republicans would say so, some even going so far as to say that it is an affront to humanity and calling it “Human heartbreak” -(Kevin McCarthy), but why would they say this now?

Previously many republicans did not condemn and even supported many of the brutal policies passed by former President Donald Trump, so why are they changing their tune now? The answer is party politics. Rather than point out actual problems republicans have been latching onto this and saying it’s Biden’s policies that are causing this pain, despite many of them being made to counter harmful policies supported by Republicans, and saying that he is directly hurting the immigrants.

This last election was the most controversial to date spawning numerous inquiries and a massive divide that has never before been seen within the American populace. With the Republicans ousted from most parts of government, they will now take any possible way to condemn the current administration and the current border situation serves as the perfect opportunity. While the event is happening during Biden’s administration the effects and responses are caused by the damage done by the Trump administration.

As well, certain recent events point to the Republican party working to divert attention away from their current situation in the house where republicans unanimously voted against a COVID relief bill, however it still passed, that would help millions of struggling Americans. “McCarthy is desperately trying to distract Americans from the fact that every single House Republican voted to block a relief bill that delivers vaccines in arms, money in pockets, children back in school safely, and people back in jobs,” Pelosi’s office.

Overall while the U.S. situation at the border is chaotic, measures are being taken to safely protect both us and the people there, however, this is a reminder that we must be mindful of bias behind what people say currently and the reasons they say such things. 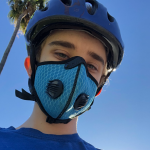 + posts
Previous Experiences at APA That, Unfortunately, Didn’t Happen
Next Math Club is coming soon and anyone is welcomed to join.

Death of the Author?